Center for the Advanced Study of American Institutions and Social Movements

(temporarily located at The University of California) 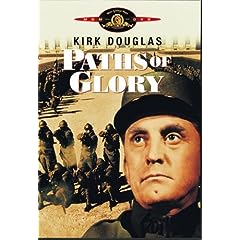 Stanley Kubrick made his talent known in 1957 with his antiwar masterpiece Paths of Glory that catapulted Kubrick to international acclaim. Based on the novel by Humphrey Cobb, the film was initiated by Kirk Douglas, who chose the young Kubrick to direct what would become one of the most powerful films about the wasteful insanity of warfare. In one of his finest roles, plays Colonel Dax, commander of a battle-worn regiment of the French army along the western front during World War I. Held in their trenches under the threat of German artillery, the regiment is ordered on a suicidal mission to capture an enemy stronghold. When the mission inevitably fails, French generals order the selection of three soldiers to be tried and executed on the charge of cowardice. Dax is appointed as defense attorney for the chosen scapegoats, and what follows is a travesty of justice that has remained relevant and powerful for decades. In the wake of some of the most authentic and devastating battle sequences ever filmed, Kubrick brilliantly explores the political machinations and selfish personal ambitions that result in battlefield slaughter and senseless executions. The film is unflinching in its condemnation of war and the self-indulgence of military leaders who orchestrate the deaths of thousands from the comfort of their luxurious headquarters. For many years, Paths of Glory was banned in as a slanderous attack on French honor, but it's clear that Kubrick's intense drama is aimed at all nations and all men. Though it touches on themes of courage and loyalty in the context of warfare, the film is specifically about the historical realities of World War I, but its impact and artistic achievement remain timeless and universal. --Jeff Shannon